Poor Wales, it’s basically the smaller and oft forgotten brother of the nations surrounding it. People know England, people know Scotland, and they know Ireland. And what do people know about Wales? They know it brought forth Princess Di, Gareth Bale and perhaps they even know it has the village with the longest name in all of Europe (that name would be Llanfairpwllgwyngyllgogerychwyrndrobwllllantysiliogogogoch, in case you were wondering). But what else do people know? What do I know? What else does Wales have to offer besides ridiculously long and unpronounceable names? Serenity, for starters.

As a word of warning regarding this article, my time in Wales was short and I opted to stick to the countryside, avoiding the coastline and larger cities, therefor, my experience with the country is rather limited. Still, there are things word writing about, and, as far as I’m concerned, things worth visiting.

Coupled with my trip to London, the two make for an interesting contrast; the buzz and hectics of London and the peace of quiet of the welsh countryside. If you plan to visit one of them, I suggest you visit both. Preferably London first, so you may come to your senses and unwind in one of the many (and cheap) B&B’s Wales has to offer.

Before I tell you about the things that make Wales a great place to visit, let me tell you about its main problem; it lacks the wow-factor. During my admittedly short visit, I did not run into anything special, spectacular or extraordinary. Perhaps one has to visit Swansea, or the coast to run into any must-sees, but so far, I found none. That isn’t to say that Wales is boring, mind you. There plenty of things like castles and natural parks to spend your time in. I spent some time pretending to be knight as I toured through Caerphilly Castle, myself. And so would you. 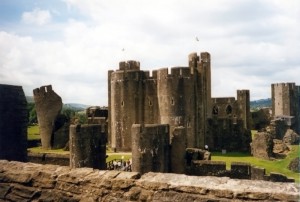 If anything, the country is beautiful. An area of hills and mountains, more quiet than noisy, a favorite combination of mine. The surroundings can be explored either by means of hiking, by car or cycling, or whatever your favorite form of transportation is. If you got a caravan or camper, this is probably a good place to be. One thing you should know about Wales though, is that it has hedgerows. Lots of tall standing hedgerows, obscuring the view on both sides of narrow roads. It’s charming, but can also be exhaustive for drivers. Sure there’s the sense of adventure awaiting you around every turn and bend, but it could also be a car about to run you over. Don’t say I didn’t warn you.

I would like to write something meaningful or insightful about the food, but I don’t think I’ve had a Welsh meal. I don’t even know if that’s a thing. Is it a thing? The meals I had were English breakfasts, sandwiches and Italian. Culture barbarism or make do with what you got?

I’m hard pressed finding any real complaints about Wales. It’s not perfect, but it’s not faulty either, at least not when it comes to traveling. Suitable compliments to give would be words like charming, quiet, peaceful, serene. It’s, for a lack of better words, harmless, inoffensive. If that’s not what you’re looking for, I wouldn’t bother with Wales (though perhaps the cities and coastal regions have more to offer). I suppose, the biggest compliment I can give is that I would not oppose visiting it again.

If going to London is like going to the pub, than going to Wales is like visiting an introverted friend. Perhaps not a lot is said or done, but you’re friends for a reason, and a visit seems to have meaning. Indeed, Wales deserves to be more than that small country in the middle of the United Kingdom. Because I did have a sense that behind every turn there’s a new adventure awaiting me. I do want to see the rest of the country, see what else it has to offer, even if I don’t know what that could be. A few days is not enough to learn about a country, and so my knowledge about Wales has not expanded by much. Still, I certainly would like it to.