Thailand, it’s a pretty popular place. Millions of people descend upon the nation each year, traveling to its northern mountains or golden shores and blue waters down south. And why shouldn’t you go there? Plenty to explore, plenty to discover, more to enjoy. Thailand thrives on tourism, it’s a major economic factor. How strange than that Amazing Thailand, as the nation’s tourism authority calls it, actually seems to be Amazing Chiang Mai, Bangkok, Phuket and sure some other minor places in the vicinity, because why not? There’s more to Thailand that’s amazing; there’s a little gem hidden in plain sight, not yet found by the masses.

It’s not due to lack of effort or trying, mind you. The Thai tourism board has tried and continues to, push the east and north-east side of the country in the spotlight. Giant malls were built, expensive and luxurious hotels have risen up, advertisements were spread around, but mostly to little avail. No matter the call, it remains unanswered by the masses in favor of yet another full moon party. In all fairness, once a year people do move east, as thousands of people head to the city of Surin to watch the annual Elephant Roundup, only to leave a few days later under the impression there’s nothing else to do. And yes, buses loaded with tourists do head up north-east. But for them it’s a stop along the way, some quick sightseeing or just a night to rest in a hotel before moving on to the familiar, oblivious to the wonders just around the corner.

In a way, it’s sort of understandable. The more famous regions of Thailand have their infrastructure for tourism all set up. Wherever you go, you’ll have someone or something take you to the next place deemed worth visiting. If you get lost, just follow the crowds. It’s easy, convenient, all taken care of. Not walking the treaded paths means having to do some work of your own, a truth that applies to more than just Thailand, of course, but that’s a story for another time. No, the sights and wonders of eastern Thailand are meant to be discovered through effort; keep your eyes and mind open, traverse along the bumpy roads and don’t fear asking for directions more often than usual. It’s worth the effort.

What provinces like Ubon and Loei lack in… panache, they make up in sincerity. It all feels slightly more genuine. Less style, more substance, slower, but steadier and so on. You don’t have to think the east is paradise and if you’re looking for pearly white shores, you’re heading in the wrong direction (actually, you can try the islands near Trat, east of Bangkok). However, should one be looking for both adventure and a chance to unwind, the east is where you need to be.

The temples are more impressive one way or another. Some are brilliantly constructed or designed. Others have decorations more spectacular than those found in the north, without a need to shove it in your face. Of course, some things just beg to become must-sees. The bottle temple in the province of Sisaket is either madness or genius. I suppose it does take a mad genius to look at a million bottles and think; I’m going to do something religious with this!

If modern-day temples aren’t your thing, than maybe older and smaller ruins, found along the border with Cambodia. A chance for some stillness and serenity. Don’t run into the woods though, you might end up in a mine field (old remnants from Thailand’s conflict with the Khmer Rouge). As I stated, it’s both relaxing and adventurous. 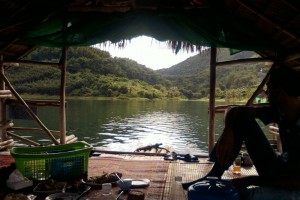 There’s more to the east of Thailand than just its rice fields (and you’ll see plenty of those). Caverns, waterfalls, markets, giant statues, silk villages, so much to explore, so much to see. It’s the place where one can stroll through national parks, go mountain trekking, then visit a lake surrounded by green hills and mountains. End the day by ordering food at a restaurant, and have your meal aboard a floating a hut. A small motorboat will drag you out into the lake, leaving you with whatever you ordered and the surrounding vistas. Other guests far away in their own hut, sometimes out of sight, definitely out of mind. Only the occasional loud splash when someone decides to combine their meal with a swim will remind you you’re not the only one there. As you enjoy your meal, a small reptilian or amphibious creature might pay you a visit for a brief moment, disappearing back into the waters after deciding you’re kind of boring. Still hungry after your meal? Just raise the flag outside and the motorboat will come back and take your next order. Life can be good some times.

The Netherlands Is Spectacularly Bland

Wales in the Middle