My trip to Munich didn’t start out well. It was raining when I left for the airport, and the weather report indicated that it would be no different at my destination. Upon arrival at the airport, I managed to slam the car door against my shoulder with a less than gentle amount of force. The security guard mistook my shoulder grasping for nervousness and probably came close to giving me the glove of love treatment. Luckily, I was spared such a less than gentle treatment. On my way to the gate however, I was treated to a pleasant surprise; a choir of young women had taken up a spot and began to sing. Their soothing voices made even the rushing passengers slow down enough to enjoy the moment. A decent airport experience. Go figure. The plane ride was less so, as the fellow passenger I was seated next to, could not refrain himself from man spreading, a problem I had mostly associated with the subway. Nor could he resist the urge to snore at a decibel level that put even the airplane engines to shame.

Why I’m telling this? Because it properly represents my entire trip; the journey to and from Munich both were terrible, but my stay at Munich? A pleasant surprise. There was enough going on to slow me down, enough for me to just enjoy the moment. It doesn’t happen very often, that after spending a few days in a city I don’t feel like getting the hell out of there.

Like the rest of Germany, here, the Germans like to drive in German cars. The BMW museum is a not so subtle reminder of it. And though the types of cars riding around might not make it obvious, there’s something very homely about Munich, something that could be described as modest. Maybe I chose to spend just the right amount of time there, or maybe it really is that fun.

I normally don’t bother too much with planning, I go where I feel it, when I feel like it, but the clouds that haunted since me since my arrival meant I had to tip toe around the times rain and thunderstorms were expected. It mostly worked. I was outside when the sun shone (brightly) and was indoors when the rain came pouring down. The only time I was caught out in the open, during my visit to the Marienplatz. Which immediately underscores the low point of my stay in Munich. The New City Hall did not impress me as a structure, nor did its Glockenspiel. The fact salesmen were running around in lederhosen, made all look a bit too tacky and forced. Strange, since the rest of the city feels authentic. Everything is presented as a matter of fact; Munich happens to be a city that has a lot to show, and no big fuss is made out of it. There is no “Hey, come over here, take a look at this!” attitude. 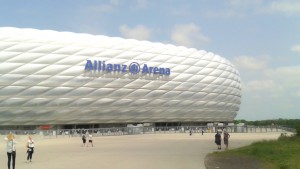 If you go for the beer, don’t bother waiting for Oktoberfest. You can always quench your thirst in this city, regardless of the month. If you’re interested in sports, go visit the Allianz Arena and the Olympic Park. Want to examine German engineering? Try the Deutsches Museum, the German version of The Smithsonian. Is history your thing, or perhaps art? There are various museums and galleries located throughout Munich, and there are several parks, where you can unwind.

Munich easily blends the old and new. There are offices located to old churches, basic houses right next to grand structures. There’s never an abrupt change. One part blends into another. Take the subway and exit a random station, you’ll just as likely end up in a classic looking neighborhood as modern one.

On Transport, and such

Speaking of transport, the trains, metro and subway systems in Munich are damn efficient (I’ll leave the jokes about German trains to you). I’ve seen a lot of people failing to exit the train in time, because they stop and go in record time. Be sure to buy yourself a (3) day ticket, it’ll give you access to these transportation, but make sure it’s a ticket that includes the outer regions as well. As my hotel was located quite far (a little too far) from the city center, I had to make use of the train and subway a lot. If you have too much time on your hand, or don’t know what to do, play a game of station bingo. See how many you can visit. If you want to make it more interesting, see how many you can actually set foot on. Keep in mind, the carts normally don’t spend more than 20 seconds at a station. I shan’t be responsible for potential injuries or death you might suffer.

German food is rather basic and bland, but there are plenty of restaurants out there that serve something else. Despite that, I couldn’t help but notice a hint o German influences; not too many vegetables, relying on one particular taste, usually a bit salty. But food comes in large portions at modest prices. Beer is served in large glasses, which helps wash away the food. And if you really must know, yes, there plenty of spots to buy yourself some bratwurst.

I want to be more critical about Munich, but there wasn’t much to complain about. Perhaps I should mention that the Allianz Arena, home of one of the world’s greatest football clubs, while having a magnificent pitch and gallery, is kind of boring on the inside, the locker room for the players, the fitness room, etc, is not as impressive as one might expect. Dull, would be the right word for it. But the tour itself is fine and costs only 10 euros to experience. Worthy for those interested in football, or sports in general. And though the city is crowded and the subways and trains packed, the wide open nature of the city never make it fel like you have fight your way through the herds to go somewhere. So I’ll end this article with one of the best possible compliments I can give: I wish I could have a stayed a day longer.

Barcelona, It Was the First Time That We Met