I never knew much about Barcelona. Most of the things I did know, were football related; Cruijf, Guardiola, Messi, Koeman. Despite my lack of knowledge of this city, I’ve always wanted to visited it, without even really knowing why. Some places have a certain allure, there’s something about them that draws you in. Barcelona had no such thing for me. My desire to visit the Catalonia’s capital, seems to stem more from a to do list than anything else. It’s most likely why I never made any concrete plans to go there. My trip to Barcelona came out of the blue; it was Friday evening when someone asked me to tag along. It was Monday when I found myself in Spain. 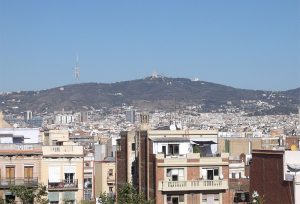 My weekend was not spent on research, one quick google search and a quick browse through Wikipedia was all the preparation I had. After a long trip, where most time was spent on delays, I finally arrived in Barcelona, having only a hotel address and a few ideas on where to go from there. First thing I did upon arrival was purchasing me a Hola BCN card/ticket*, and getting acquainted with the public transportation system. After some initial confusion, I ended up mastering the skill of riding the subway (not a dirty metaphor).

My first day was mostly wasted thanks to earlier mentioned delays, and a need to get some sleep. Have you ever been stuck in a jet bridge? Where you’re just a few meters away from entering the plane, and you’re not going forward or backwards? A new delay after you’ve already had a delay? And on top of it all, there’s a third delay because Cristiano Ronaldo’s private jet needed to make a crash landing? I’ve had plenty of delays, but these two were a first for me.

After a long, but terrible night, and a large but not particularly great breakfast, I finally got to exploring Barcelona, using the Triposo app as my guide. Taking the feet mobile, I first spent some time walking around, exploring the neighborhood. My hotel was located near the city center, not far from La Rambla and Montjuic. One would turn out to be a big disappointment, the other, a highlight. La Rambla is the big tourist destination. This nearly mile long road houses bars, restaurants, souvenir shops, Burger Kings, pick pockets, and so on. It’s big, popular, expensive, typical, dull. A quick wikipedia search tells me the this street was once a sewage filled stream bed. Entirely appropriate, as walking from one end to the other made me feel like Andy Dufresne escaping from Shawshank prison. La Rambla is nothing I care about, so I shan’t waste more words on it.

Located next to the sewage stream, is the Barri Gotic, the gothic quarter. With its small, and far less crowded streets, it’s a more scenic and better alternative to La Rambla. And though I enjoy a walk down the streets of a city, the arguably finest part of the city lies only a long hike away: Montjuic Hill.

Montjuic hill feels like a gem hidden in plain sight. It’s not that people don’t know about it. Plenty of people work their way up this hill, either by bus, via cable car, or, if they are poor bastards like me, they walk. But most visitors only visit the castle at the top. Entrance to this castle is 5 euros per adult, so it’s worth the visit, but the best part of Montjuic lies beyond the castle walls; in the parks and on the paths. Montjuic is incredibly quiet in comparison to the rest of the city. Wander around, and it might feel like part of a small town or village, instead of a city of millions. The serenity of the park is a stark contrast to the city center.

Do you yourself a favor, buy some wine, some cheese, sausages, and bread. Though the Montjuic is a great place for a picknick during the day, wait till just before sunset. On this hill you’ll have a wonderful 360 degree view of the city, so find yourself a good vantage point and settle down on the ground. Now pop open that bottle of wine, and enjoy the show. Watch the sun disappear beyond the distant hills and see the city lights come to life. 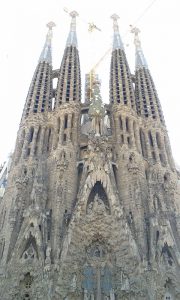 When you explore Barcelona, good chance you’ll run into the works of the 19th century architect Antoni Gaudi. His works include the Casa Battlo, Park Guell and most famous of all, the Sagrada Familia. The Sagrada Familia is considered to be one of the must sees in the city, and I actually agree with that statement. This church looks absolutely phenomenal. It’s one of those few buildings where images don’t do it justice. The outside is a sight to behold. What it looks like inside? Hell if I know. The line to get inside was way too long, and therefore an immediate NOPE for me. Still, the Sagrada is well worth visiting, and if you don’t go inside it’s also free.

I haven’t mentioned it yet, but of course Barcelona is located at the beach. Though I spent an afternoon walking at the beach, there’s not much to mention about. It’s a city beach as you would imagine it. I prefer beaches that are less occupied (remember: the further away from the center, the less people). Nothing wrong with the beaches of Barcelona, though it I have to retract some points for the ferris wheel. I hate ferris wheels. I enjoyed the harbors, though, be it the marina with its yachts, or the industrial harbor with its large container ships.

And now we get to the cuisine. But what can I say? If you want decent food and drinks, try to avoid the more touristy places. Go where the locals go. Usually its in the smaller streets where you’ll find the best places to eat and drink. When buying beer, try to get a hold of some Barcino Gotic Ale. Spanish beers aren’t that great, but this one is quite alright.

I want to tell you more about this city. There’s so much to do and see. I wish I could have seen FC Barcelona play, but alas, the week I visited was the week they played their away game. If I had the time, I could have visited Montserrat. Barcelona has a lot to offer. And it’s this vast array of sights and attractions that makes me want to go back. Barcelona didn’t wow me, but I enjoyed it, some times, even loved it. I’m looking forward to another visit, to the parts I haven’t, and the parts I have.

Freddy Mercury sang “Barcelona, it was the first time that we met. Barcelona, how can I forget. The moment that you stepped into the room, you took my breath away.” Those lyrics and sentiments now make sense to me.

*The Barcelona public transportation system offers multiple tickets you can purchase. From tickets for a single ride with the bus or subway, to tickets that offer unlimited acces to the transportation system within the city, for a number of days. The Hola BCN card is one of those tickets. Purchasing one is highly recommended.

Taxis are relatively cheap. Shortly after midnight, the buses and subways stop riding. So don’t be afraid to call for a cab.

Beware of pick pockets. There are a lot of them in Barcelona. Especially on La Rambla, and at places like the Magic Fountain show. When you are busy taking pictures, they’ll be busy taking your wallet.

I was supposed to release a video alongside this article, but I wasn’t happy with the footage I shot, and definitely not with my terrible voice over. consider this an IOU.

Lisbon, Cascais, and Something to Drink